Phytophthora cactorum has a long history in the plant pathological literature, having first been described as Peronospora cactorum  - a pathogen of cacti - in 1870 (Lebert and Cohn, 1870) and subsequently found worldwide on well over 250 plant species in at least 150 genera (Erwin and Ribeiro 1996).  With respect to forest trees, the potential for P. cactorum to cause disease across a wide range of hosts became evident early on inasmuch as Hartig (1876, 1880, 1882, 1883) recovered the organism from dying seedlings in the genera Abies, Acacia, Acer, Cedrus, Fagus, Larix, Picea, Pinus, and Robinia.  Since then, P. cactorum has been reported from 21 additional genera of forest trees and from some commercially important roseaceous fruit trees.

In most cases, P. cactorum has been associated with crown and collar rot or damping off of forest tree seedlings and as such has been inadvertently managed in nurseries as part of routine maintenance programs to minimize damping off.  However, certain strains have occasionally been associated with more serious problems such as lethal root collar cankers on Abies, Acer, and Cornus.

Of particular concern and deserving of considerably more attention than is currently available are the frequent reports of debilitating - if not lethal - bleeding stem cankers on deciduous trees worldwide.  Affected genera include Acer, Aesculus, Betula, Castanea,Fagus, Juglans, Liquidamber, Ostrya, Quercus, Salix, Tilia, and Ulmus.  Virtually every one of these reports has been generated by someone who was sufficiently concerned about the propensity of field symptoms to feel compelled to bring it to the scientific community.  More often than not, the concerning episode seems to resolve itself without further human intervention and the report becomes little more than an addition to the historical record.  But one has to wonder why these events come and go as they do and whether some other Phytophthora-caused diseases of grave concern were once written off or ignored because they, too, disappeared as quickly as they appeared. 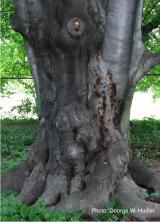 Despite the broad geographic distribution and diverse host range of P. cactorum, it seems to be causing little concerning damage to forest trees.  One recent report from the Czech Republic (Cerny et al. 2009) indicates that an "outbreak" there caused noticeable damage to Fagus, Betula  and (for the first time ever?) Populus, but there has been no follow-up to suggest that the incidence of the disease continued to attract attention.  Perhaps one reason for the sporadic reports of these diseases in forest communities is that the little evidence available suggests that there is considerable host specificity among strains of the pathogen.  In the most recent study of this phenomenon, strains from strawberries had no effect on birch trees from which a "birch strain" of P. cactorum had been isolated.  Similarly, the "birch strain" failed to cause disease on strawberries.  Given the heterogeneous nature of many forest communities and the presumably limited ability of predominantly soil-borne pathogens like P. cactorum to move readily to new hosts, evolution of such host specificity may be the norm and, as such, minimize intra-host spread.

The table of susceptible hosts below includes only the most ecologically and economically important host species.

For more information about Phytophthora cactorum, visit our Pathogen, Education and Management materials, and Reference sections.