Phytophthora cactorum (Leb. and Cohn) Schröeter has a long history in the plant pathological literature, having first been described as Peronospora cactorum  - a pathogen of cacti - in 1870 (Lebert and Cohn, 1870) and subsequently found worldwide on well over 250 plant species in at least 150 genera (Erwin and Ribeiro 1996).  With respect to forest trees, the potential for P. cactorum to cause disease across a wide range of hosts became evident early on inasmuch as Hartig (1876, 1880, 1882, 1883) recovered the organism from dying seedlings in the genera Abies, Acacia, Acer, Cedrus, Fagus, Larix, Picea, Pinus, and Robinia.  Since then, P. cactorum has been reported from 21 additional genera of forest trees and from some commercially important roseaceous fruit trees. 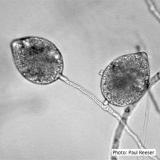 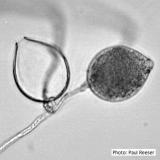 Mycelia grow on a wide array of common laboratory media including PDA, CMA, LBA and V8A.  P. cactorum readily fruits in culture or on plant tissue used as bait,  producing caducous, usually terminal, pear-shaped sporangia, each on a short (< 4μm long) pedicel.  The generative pedicels may be simple and well-spaced, but more often they are clustered and may even have a sympodial arrangement. Sporangia have prominent papillae and are typically 30 μm long (+/- 5μm) and 26 μm (+/- 4 μm) wide.   Some, but not all, isolates produce chlamydospores, usually at the tip of generative hyphae but occasionally via intercalary formation.  When they do occur, chlamydospores have moderately thick cell walls (1-1.5 μm) and range from 25-40 μm dia.  Sexual reproduction in P. cactorum is uniformly homothallic with paragynous antheridia. 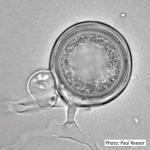 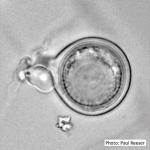 P. cactorum is placed in Clade 1a (http://www.phytophthoradb.org/species), most closely related to P. pseudotsugae, a pathogen of Douglas-fir seedlings in the Pacific Northwest states in the U.S.  Only one other noteworthy forest tree pathogen - P. nicotianae - is in Clade I, but two important pathogens of agricultural crops - P. infestans and P. phaseoli - are also closely related (Clade 1c). 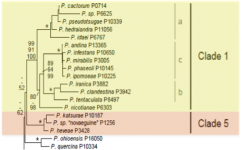 Because of the high importance of P. cactorum as one of several species causing crown rot in apple orchards throughout the world, more effort seems to have gone into study of detection and recovery of the pathogen from orchard soils and associated host plant tissue than from other plant species.   Typically, isolation follows baiting soil or soil extract with one or more plant parts including fruit (apple, pear, strawberry, etc.), hemp or rape seeds, and (rarely) pine needles.  In an extensive study of sampling methods, Jeffers found that 2-4 day old apple seedlings were uniquely suited to recovery of the pathogen from New York orchard soils, and it would seem prudent for others who are trying to get complete assays of soils anywhere to include the seedlings as baits.  Jeffers also found that it was important to dry soil samples for a time and then rewet them prior to baiting. Failure to do that often led to gross underestimation of pathogen populations.

In any case, necrotic tissue developing on whatever bait has been used is then transferred to a selective medium that typically has cornmeal agar as its base and has been amended with antibiotics and antifungal compounds, especially pimaricin, rifampicin, PCNB and hymexazol.  One noteworthy observation by Jeffers was that enough of his strains were so sensitive to hymexazol that further assays for the pathogen should probably include some hymexazol-free media as an alternative to conventional selective recipes.

Gross morphology of cultures is unremarkable, described by Erwin and Ribeiro in comparison to other common species as a "less defined petaloid colony" with the amount of growth of submerged mycelium approximately equal to that occurring above the agar surface.  Hyphae are coenocytic, usually less than 6 μm wide and often irregularly shaped with randomly placed, slight swellings and loose coralloid growth; nothing that seems to be of value in distinction from many other species. 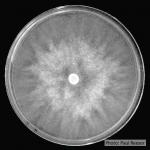 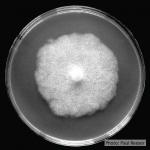 In the absence of nucleic acid sequences, a reasonably reliable distinction of P. cactorum from other Phytophthora species with similar morphology can be made with observation that the isolate in question (1) is homothallic, (2) has paragynous antheridia that arise from the parent hypha very close to - if not intertwined with - the oogonium stalk, (3) has plerotic and aplerotic oospores, and (4) produces caducous and conspicuously papillate sporangia with one apex and a short pedicel.  P. cactorum also produces chlamydospores when stressed.

Host range and geographic distribution of the various isolates can also be helpful.  P. cactorum has a wide range of plant hosts and occurs in temperate sites throughout the globe.  In contrast, P. hedraiandra is so far known only attacking rhodendron and viburnum plants in a few sites in Minnesota and Virginia (USA) and the Netherlands, Italy and Spain (Europe).  Similarly, P. clandestina has been found only attacking subterranean clover in Australia.

In the event that one starts first with nucleic acid sequences and then presumes to confirm ID by morphological features, the closest relative on the phylogenetic tree, P. pseudotsugae, has noncaducous, predominantly spherical sporangia and oospores that are up to 20%(= 5μm)  larger in diameter than those of P. cactorum.

Overall, P. cactorum is among those species of Phytophthora that can be readily identified by morphology from isolation plates. P. cactorum is the only one having exclusively paragynous antheridial attachment among all homothallic species producing caducous and conspicuously papillate sporangia with a short pedicel.

For more information about Phytophthora cactorum, visit our Disease, Education and Management materials, and Reference sections.