P. frigida produces sporangia abundantly in 10% nonsterile soil extract when grown under constant light. Most sporangia have prominent papillae. Most isolates have persistent sporangia formed singly or in a loose sympodium. The sporangial shape is predominantly ovoid, although there are other shapes such as globose, ellipsoid, and obpyriform found in some isolates, including some distorted shapes. The dimensions of sporangia range from 29 to 71 × 20 to 53 μm (avg. 46 × 33 μm), with length-breadth ratios of 1.3 to 1.5 (avg. 1.4). P. frigida produces terminal or intercalary globose chlamydospores that measure 21 to 55 μm in diameter (avg. 32 μm). P. frigida is heterothallic. Oogonial  diameters range from 22 to 37 μm (avg. 30 μm). Antheridia are amphigynous and oospores are globose, aplerotic, and 18 to 31 μm (avg. 24 μm) in diameter (Alves et al., 2016). 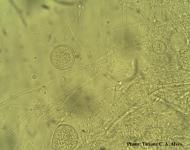 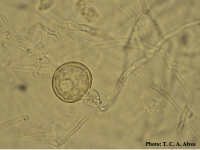 Phytophthora frigida is not easily distinguished from P. nicotianae by morphological characteristics, because both produce papillate, persistent, ovoid sporangia, and are heterothallic with amphigynous antheridia. Many isolates of P. frigida may have been classified as P. nicotianae until 2007, since the occurrence of this was long associated with gummosis in black wattle (Alves et al. 2011). They can be separated by molecular analysis of the ITS region, putting P. frigida in Clade 2 and P. nicotianae in Clade 1.
Phytophthora frigida can be distinguished from P. boehmeriae because the latter is homothallic, produces deciduous sporangia with short pedicels (<5 um), and does not grow at 32oC (Santos et al., 2006). Phytophthora meadii differs from P. frigida because it produces deciduous sporangia on medium-length pedicels (18 μm) (Gallegly and Hong 2008).

For more information about Phytophthora frigida, visit our Disease, Education and Management materials, and Reference sections.