P. cinnamomi Rands (1922) was first described in Sumatra in 1922 as the cause of stripe canker on the cinnamon tree, and the islands of SE Asia are still considered the likely evolutionary home of this most important Phytophthora pathogen of woody plants, including forest trees. It was spread worldwide, starting in the era of plant exploration and sailing ships. It is now widespread and continues to be destructive in forests of Australia, Mediterranean countries, and the SE United States, but is only recently appreciated as a danger to forests in western North America. P. cinnamomi has the broadest host range of any Phytophthora species. 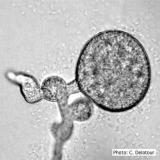 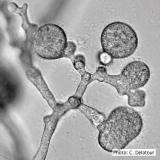 Hyphal swellings or thin-walled chlamydospores. These are usually formed readily in water in greater abundance than sporangia, but may be slow to form and are sparse in agar.

Colony morphology on V8 agar is distinctive (medium-dense, wooly, uniform, filling the space between lid and agar surface); hyphae are tough. Ovoid non-papillate sporangia form in water but are usually rather sparse. Sporangia often appear almost semi-papillate due to slight apical thickening. Sporangia (average 57 μm by 33 μm) are broadly ellipsoid or ovoid, and persistent. They are formed on simple, unbranched or lax sympodial sporangiophores, and exhibit internal proliferation.

Hyphal swellings or thin-walled chlamydospores are usually formed readily in water in greater abundance than sporangia, but may be slow to form and are sparse in agar. Hyphal swellings are globose and often in botryose clusters. P. cinnamomi is heterothallic, with oogonia not seen in single culture. Typically only one mating type is found in a region. 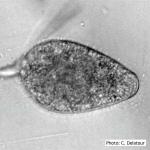 P. cinnamomi is in phylogenetic clade 7 with P. cambivora, with which it shares many features. 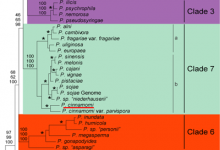 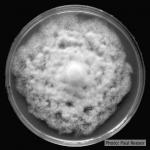 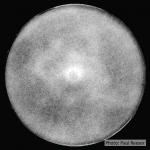 Colony morphology on V8 agar is distinctive (medium-dense, wooly, uniform, filling the space between lid and agar surface), and hyphae are tough. In water sporangia are usually rare, but botryose hyphal swellings are common. These characters are usually sufficient for identification. Although described as non-papillate, a slight apical thickening may give sporangia a scarcely semi-papillate appearance.

For more information about Phytophthora cinnamomi, visit our Disease, Education and Management materials, and Reference sections.