Phytophthora alni Brasier & S.A. Kirk (2004) was discovered in 1993 in southern England causing lethal root and collar rot in alders. It has subsequently been reported in many European countries including the Netherlands, Germany, France, Sweden, Belgium, Austria and Hungary, and has recently been found in Alaska and Oregon.  P. alni is unusually variable, perhaps as a result of recent hybridizations among related species. There are three subspecies: the most commonly isolated and most virulent subspecies P. alni ssp. alni and two less commonly isolated subspecies, P. alni ssp. uniformis and P. alni ssp. multiformis. Etymology: From Alnus, the tree from which the pathogen was first isolated.

The typical form of P. alni, P. alni ssp. alni, is homothallic, with gametangia usually frequent. Oogonia have tapered stalks, and are variably warty with bullate protuberances (similar to those of P. cambivora). Diameters of mature oogonia commonly range from 43 to 50 um. Other oogonia are only partially developed and sometimes distorted or with beak-like or tube-like projections. Commonly many oogonia abort or produce thin-walled oospores. Antheridia are predominantly two-celled and amphigynous.  Sporangia are not seen on carrot agar (CA) but are produced sparsely in pea broth or when plugs from margins of actively growing cultures on CA are partially submerged in pond water or soil leachate. Sporangia are borne singly on long sporangiophores, ellipsoid, non-papillate, and noncaducous. They exhibit nested or extended internal proliferation. Average sporangial lengths range from 48–60 mm and widths range from 31 to 43 mm. The length/width ratio ranges from about 1.3 to 1.6. No chlamydospores are observed. The other subspecies of P. alni are recognizably similar to P. alni ssp. alni, but are often more variable in growth and morphology. Many isolates appear to be unstable in culture. 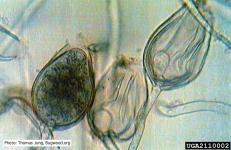 Phytophthora alni is in phylogenetic clade 7, with its evident ancestor, P. cambivora. A recent genetic analysis has suggested that P. alni alni. was generated on many separate occasions by the hybridization of either P. alni uniformis with P. alni multiformis or their ancestors. The same analysis suggests that P. alni uniformis may have P. cambivora as an ancestor. P. alni multiformis may have been generated by autopolyploidization (the spontaneous duplication of chromosome number within a species) or by ancient hybridization of two unknown species. Unlike most species of Phytophthora, which are diploid, P. alni alni is near tetraploid and unable to complete meiosis beyond metaphase I. In culture, many oogonia prematurely abort or appear abnormal and only one third of the oospores that appear normal are reported to be viable. As a result it is believed to spread predominantly via asexual means, namely zoospores produced in sporangia. 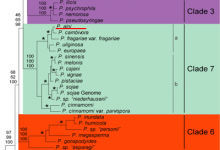 Colonies growing on carrot agar (CA) are usually appressed-felty with no or very sparse aerial mycelium; sometimes they are appressed with a little uniform woolly overgrowth close to the colony surface. Colonies sometimes have faster or slower growing areas. Optimum temperature for growth on CA ,is about 23–25 C. The upper limit for growth on CA is about 29 C. Radial growth at 25 C on CA ranges from 4 to 8 mm/d.

Phytophthora alni appears similar to P. cambivora in colony form with bullate oogonia and 2-celled antheridia. P. alni is homothallic, however. The fluffy, patternless colony morphology on agar is distinctive. Sporangia are usually slow to form, and not abundant. They are non-papillate and generally non-descript.

Q-bank (comprehensive databases on regulated plant pests, based in the Netherlands) offers identification of unknown Phytophthora specimens with the help of any combination of morphological and molecular data. www.q-bank.eu/fungi

For more information about Phytophthora alni, visit our Disease, Education and Management materials, and Reference sections.