Phytophthora siskiyouensis Reeser & E.M. Hansen 2007 was discovered first in streams and soil in Curry County, Oregon in areas dominated by native forest, and most isolates continue to come from these sources.  Only later, and still infrequently, were isolates of the new species recovered from diseased forest plants. Recent reports that the same fungus was killing alders planted in cities in California (Rooney-Latham et al. 2007) and Australia (Smith et al. 2006) were a surprise.

Phytophthora siskiyouensis appears to be part of the native forest mycoflora of SW Oregon, causing occasional symptoms on a variety of associated plants, including bole cankers on tanoaks. Its appearance as an aggressive pathogen of alder in urban settings (Rooney-Latham et al. 2007, Smith et al. 2006), however, suggests that it has a larger distribution and greater pathogenic potential than has been observed in Oregon.  Red alder trees of all ages grow on the sites and adjacent to the streams that yielded P. siskiyouensis in Oregon, but careful examination and isolations yielded no Phytophthora.

Etymology: ‘‘siskiyouensis’’ refers to the Siskiyou Mountains in SW Oregon where the new species was first identified. 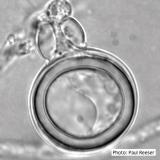 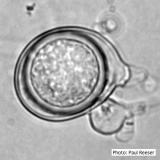 With its semi-papillate sporangia and predominately paragynous antheridia, Phytophthora siskiyouensis would be placed in Waterhouse’s (1963) Group III.  Sporangia (average 46–70 µm by 30–51 µm) formed in water are ovoid, reniform, or misshapen, on simple, unbranched sporangiophores, terminal, subterminal or intercalary, and attached basally, subbasally, or laterally.  Sporangia are semi-papillate with papillae apical, subabical, or lateral, and sometimes more than one are present.  Sporangia are weakly caducous with variable length (0–133 µm) pedicels.   A small hyphal swelling is sometimes seen on the sporangiophore. Oogonia (average 25 µm to 30 µm), are formed in agar in single strain culture. They are globose to subglobose, terminal on long or short stalks or often sessile or laterally intercalary, with predominately paragynous (about 10 percent amphigynous), capitate antheridia. Oospores (average ca. 23–26 µm) are globose to subglobose, and slightly to markedly aplerotic. Hyphal swellings or chlamydospores are not formed in agar. 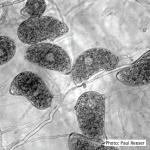 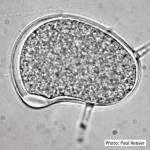 Sporangia showing a variety of shapes and orientations (left), and obovoid sporangium with lateral semi-papilla and subterminal, sub-basal insertion in the sporangiophore (right). Photos: P. Reeser

ITS sequences showed greatest similarity to P. tropicalis and P. capsici in phylogenetic Clade 2, but consistent differences were found between P. siskiyouensis and these related species. P. siskiyouensis is distinguished morphologically from these relatives (Aragaki and Uchida 2001) by its homothallic condition, predominately paragynous antheridia and semipapillate sporangia on unbranched sporangiophores.

Placement of P. siskiyouensis based on ITS rDNA sequences. (Reeser et al. 2007) 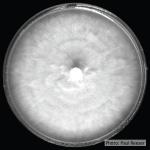 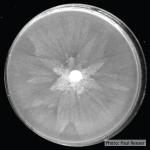 P. siskiyouensis is most readily recognized by its uniquely and irregularly shaped sporangia formed in water, and by the frequent occurrence of sessile and intercalary oogonia in agar. Sporangia may also form on some agar media with a mostly elongate obovoid shape and cymose sporangiophore reminiscent of P. hibernalis.  Sporangia in water are characteristically reniform with off-center semipapillae and sporangiophore attachment, the irregular sporangia are reminiscent of P. citricola. It is distinguished readily from the latter species, however, by having deciduous sporangia with variable length pedicels, variable orientation of semipapilla and sporangiophore attachment, intercalary and sessile attachment of some oogonia and mostly aplerotic oospores. P. siskiyouensis sporangia resemble those depicted for P. quercina, (Jung et al. 1999) except that they are slightly larger, semipapillate, weakly deciduous, and are formed singly on simple, unbranched sporangiophores. Sexual structures also resemble P. quercina, except that oogonia may be sessile or intercalary, and antheridia may be paragynous or amphigynous. The oogonial stalk and arrangement of paragynous antheridia are similar to those described for P. hedraiandra (de Cock and Levesque 2004).

For more information about Phytophthora siskiyouensis, visit our Disease, Education and Management materials, and Reference sections.