The only economically important host of Phytophthora megakarya Brasier & Griffin is Theobroma cacao.  The pathogen is one of several Phytophthora species causing black pod disease of cacao.  Isolates of P. megakarya were grouped taxonomically with P. palmivora isolates until 1979, when it was recognized as a new species (Brasier and Griffin, 1979).  Found only in Central and West Africa, losses due to black pod disease caused by P. megakarya can be 50-80% in nontreated areas (Despréaux, 2004).

Etymology: Derived from ‘large’ (mega) ‘karyotype’ (karya) due to the larger chromosomes compared to P. palmivora. 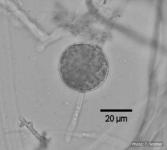 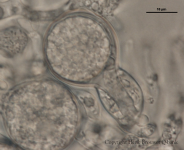 http://phytophthora-id.org/ is a good web-based, searchable database for rapid identification of Phytophthora species based on sequencing of the internal transcribed spacer (ITS) or the cytochrome oxidase (cox) 1 and 2 spacer regions followed by BLAST searching the database.  Both databases are highly selective and include only sequences that are associated with published Phytophthora species descriptions or classic Phytophthora phylogenetics references. 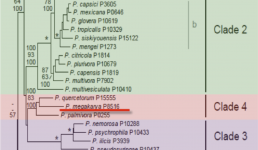 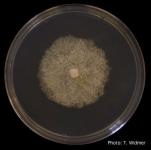 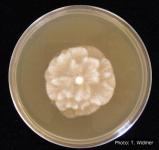 For more information about Phytophthora megakarya, visit our Disease, Education and Management materials, and Reference sections.