In 2004 and increasingly through 2006, a new disease of Pinus radiata, referred to as ‘Daño Foliar del Pino’ (DFP) appeared in the Arauco province of Chile and subsequently spread to other areas in central Chile planted with radiata pine. The disease is typified by needle infections, exudation of resin at the bases of the needle bundles and, in younger trees, necrotic lesions in the cambium which eventually girdle the branches. In 2007 a previously unknown Phytophthora sp. was isolated from needle tissue. In 2008 it was formally described as Phytophthora pinifolia by Alvaro Duran and colleagues from Bioforest S.A., Concepción, Chile and the Forestry and Agricultural Biotechnology Institute (FABI), University of Pretoria, South Africa (Duran et al. 2008). This new species is characterized by unbranched sporangiophores and non-papillate, sub-globose to ovoid sporangia that are occasionally caducous. Sexual structures were not observed. Phytophthora pinifolia is the first Phytophthora known to be associated with needles and shoots of a Pinus sp. Etymology : ‘pinifolia’ refers to the occurrence of the organism on the needles of Pinus radiata.

Cultures on cornmeal agar selective medium were submerged with coralloid hyphae, while carrot agar (CA) and V8 cultures were fluffy with a regular to rosaceous or petallate margin. Sporangia formed abundantly in soil water and were generally absent in agar culture. Sporangia were borne on predominantly unbranched sporangiophores and were non-papillate, sub-globose to ovoid. Free sporangia with pedicels were occasionally observed after agitation of liquid cultures. Oogonia did not form in single culture or when paired with A1 or A2 tester isolates of heterothallic species. 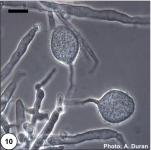 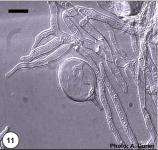 Phytophthora pinifolia resides in Clade 6 of the ITS-based phylogeny of Cooke et al. (2000). Other species in this group include P. gonapodyides, P. megasperma and P. inundata. These species are all ecologically and morphologically different from P. pinifolia despite their phylogenetic affinity. AFLP analysis of isolates collected from throughout the area of infestation in Chile suggests that P. pinifolia exists as a clonal population, with very little genetic variation. This is consistent with a single, recent introduction of the pathogen, although its origins remain unknown.

The phylogenetic tree below is from Duran et al. 2008, Fig. 3. It is one of 10 most parsimonious trees having the same overall topology obtained through analysis of ITS rDNA sequence data, reflecting hypotheses of phylogenetic relationships for Phytophthora pinifolia and other Phytophthora species. The tree is rooted to Pythium aphanidermatum. Bootstrap support values (1000 replicates) are given at the branch nodes. 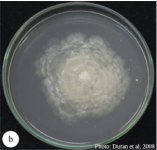 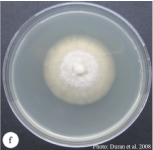 Morphologically P. pinifolia is similar to other clade 6 species, with unbranched sporangiophores and non-papillate, ovoid sporangia.  Deciduous sporangia are infrequent. They are not typical of other species in the clade. P. pinifolia appears to be sexually sterile, like many clade 6 species. Phytophthora pinifolia is the first Phytophthora known to be associated with needles and shoots of a Pinus sp. and its apparent aerial habit is unique in clade 6.

For more information about Phytophthora pinifolia, visit our Disease, Education and Management materials, and Reference sections.