P. tentaculata was first discovered causing a stem and root rot of greenhouse-grown ornamentals in Germany in 1993 (Kröber and Marwitz, 1993), before being found in Spain and Italy (Moralejo et al., 2004; Álvarez et al., 2006; Cristinzio et al., 2006; Martini et al., 2009). It was detected in China in 2007 in field-grown medicinal plants and again in 2012 in field-grown celery (Meng and Wang, 2006; Wang and Zhao, 2014). In a USDA risk assessment, P. tentaculata was listed in the top 5 Phytophthora species of concern to the U.S. due to its potential environmental and economic impacts (Schwartzburg et al., 2009). In 2012, it was first found in North America in a California native plant nursery on sticky monkey flower (Diplacus aurantiacus syn=Mimulus aurantiacus) (Rooney-Latham and Blomquist, 2014). It has since been detected in numerous other California native plant nurseries and in outplanted nursery stock in a few restoration sites (Frankel et al., 2015). The origin of P. tentaculata is unknown.

In California, the pathogen appears to have been spread within and between nurseries by the use of infested pots and potentially by infected plants. Very little research has been done on specific control strategies. Like other Phytophthora diseases spread by zoospores in water, the use of strict sanitation and planting practices (i.e. use of clean soil, media, pots and propagation materials, proper irrigation, and keeping plants off the ground to prevent standing in water and water splash) are recommended to reduce the risk of pathogen spread. In addition, strict isolation of newly acquired plants from other sources must be maintained until the health of the plants is confirmed. Soil solarization and steam injection are being investigated as means to eradicate spot infestations resulting from the planting of infested nursery stock. 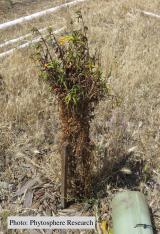 In Europe, P. tentaculata has been detected mostly in ornamental nurseries (Kröber and Marwitz, 1993) though there have been a few detections in commercial fields, usually associated with transplants (Garibaldi et al., 2010, Cristinzio et al., 2006). In California, P. tentaculata has only been detected in the environment on plants that have been grown in a nursery and planted out for restoration purposes. However, it has persisted on infected stock in the field for at least 4.5 years in northern California. The fact that both infected plants and the pathogen can survive for years after outplanting increases the potential for eventual spread from infected stock into native wildlands. Because the pathogen is reported to cause severe root and crown rot on a wide range of woody and semi-woody hosts, its introduction with infected nursery-grown plants could threaten key components of native plant communities being restored.

P. tentaculata causes a moderate to severe root and crown rot, depending on the host species.   It has not been shown to be a foliar pathogen.  The pathogen is known to cause high mortality in heavily infected plants (Kröber and Marwitz, 1993).  Amongst Californian hosts, sticky monkey flower (Diplacus aurantiacus) appears to be highly susceptible (Rooney-Latham and Blomquist, 2014).  Artificially inoculated plants wilted and showed severe crown and root symptoms two weeks after exposure to P. tentaculata zoospores (lower photo on Figure to right).  More than two thirds of the California detections of P. tentaculata to date have been on sticky monkey flower.

Field-planted nursery stock infected with P. tentaculata exhibits varying symptoms.  Infected Diplacus plants are stunted, with dull, yellowish leaves that turn red as the disease progresses. Roots and stem collars have necrotic, sunken lesions with few feeder roots. Plants have shown poor growth and eventual collapse within the first season in some situations.  In other cases, plants have grown for a year or more before developing extensive dieback with the onset of high evaporative demand in summer (upper photo on Figure to right).  Transplanted Artemisia douglasiana plants infected with P. tentaculata were stunted and somewhat chlorotic more than 4.5 years after planting, but did not show obvious dieback.

For more information about Phytophthora tentaculata, visit our Pathogen, Education and Management materials, and Reference sections.