Phytophthora nicotianae was the first species associated with gummosis of black wattle in 1971 in South Africa (Zeiljemaker 1971). Other species associated with gummosis are: in Brazil, P. boehmeriae (Santos et al., 2006) and P. frigida (Alves et al, 2016); and in South Africa, P. boehmeriae and P. meadii (Roux and Wingfield 1997). Symptoms of gummosis occur on the trunk and are characterized by necrotic lesions in the bark. The abundant gummy exudation is the most characteristic symptom of the disease but is easily confused with other problems, since gum exudes from the trunk of the black wattle when injured by both biotic and abiotic agents. The amount of gum produced depends on the genetic characteristic of the tree and environmental factors, such as temperature and moisture availability. As a result, there is little gum in the dry season, but much gum can be exuded in the wet season (Zeiljemaker, 1968). 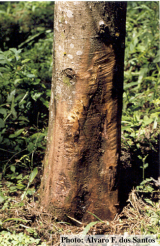 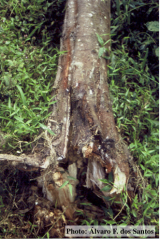 Black wattle is a forest species from Australia, planted in South Africa and in southern Brazil, both for the production of tannin from the bark and for the wood used in energy production, pulp and paper. In Brazil, it is planted mainly for the production of tannin. Gummosis is the main disease problem of black wattle. The pathogen damages the bark, especially in the basal and middle portions of the trunk, causing economic losses in production of bark and, in extreme cases, death of trees (Santos et al. 2007).

In black wattle plantations, it is not possible to differentiate the symptoms of gummosis caused by P. frigida and P. nicotianae. The two pathogens cause similar symptoms which are characterized by necrotic lesions, with or without exudation,  localized in the basal region of the trunk. Lesions do not reach heights greater than 1.5 m (Alves et al. 2016; Santos et al. 2005, Santos et al. 2007).

For more information about Phytophthora nicotianae, visit our Pathogen, Education and Management materials, and Reference sections.