Port-Orford-cedar (POC) root disease was first reported on ornamental cedars in the USA Pacific Northwest near Seattle, Washington, in 1923, but the pathogen was not named until 1942 (Tucker and Milbrath 1942). P. lateralis was found in the native range of POC in about 1950 and by 1970 it had been spread throughout the tree’s range in Oregon (Zobel et al. 1985). It was first reported from California in 1980, and is now present in all areas where POC grows as a native forest tree (northern California and southwest Oregon) (Betlejewski et al. 2003).  P. lateralis was detected  in France in 1998 and the Netherlands in 2004 and 2010 on nursery-grown plants (Hansen et al. 1999, Meffert 2007, Netherlands Plant Protection Service 2010). A disease outbreak on hedgerow cedar trees has recently been reported in northwest France (Robin et al. 2010). It has also been reported in a country park on the shores of Loch Lomond in Scotland (BBC News Scotland 2010). Disturbingly, in Europe the pathogen appears to be spreading as windblown sporangia, causing foliar infections. The discovery of P. lateralis in an old growth Chamaecyparis obtusa forest in Taiwan (Brasier et al. 2010) suggests that this may be the geographic center of origin for the species. 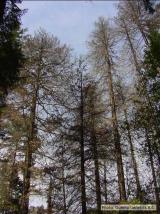 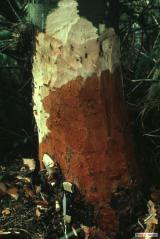 The behavior of P. lateralis in Oregon and California clearly marks it as an exotic, invasive pathogen.  It is carried uphill and between watersheds in mud on vehicles and equipment.  Domestic and wild animals, as well as humans, also transport the pathogen.  Once introduced into a drainage, it washes downhill along stream courses, attacking and killing any POC encountered (Hansen et al. 2000, Jules et al. 2002).  In Europe, P. lateralis is now established in several countries and killing POC trees planted as windbreaks and in landscape plantings.  Although P. lateralis was recently discovered in forest soils in Taiwan, there are no acute disease symptoms in the native forests.

P. lateralis is essentially host specific on Port-Orford-cedar (Chamaecyparis lawsoniana). Pacific yew (Taxus brevifolia) may also be killed when growing among diseased cedars, although more slowly (DeNitto and Kleijunas 1991, Murray and Hansen 1997). Other Chamaecyparis species and other Cupressaceae that have been tested are much more resistant, although C. nootkatensis (Alaska cedar) and Thuja occidentalis (Arborvitae) are rarely infected. Reports on other hosts from other parts of the world have proven to be based on misidentification, or otherwise impossible to confirm.  P. lateralis is found in landscape plantings throughout the Pacific Northwest (British Columbia to northern California) and increasingly in Europe. In the forest it has now spread throughout the native range of Port-Orford-cedar, which spans southwest Oregon and Northern California.

In Europe P. lateralis was reported from POC ornamental nursery stock in France (Hansen et al. 1999) and the Netherlands (Meffert 2007). It appeared to have been eradicated from those countries but was recently reported from landscape plantings in France and Scotland. In Asia (Taiwan), no acute disease or mortality of the host (Chamaecyparis obtusa var. formosana) by the pathogen has been observed in native forests.

For more information about Phytophthora lateralis, visit our Pathogen, Education and Management materials, and Reference sections.