A new Phytophthora species was isolated from diseased rhododendrons and European beech in Cornwall, UK in 2003.  Initially called ‘Phytophthora taxon C’ or ‘P. kernovii’, it was later named P. kernoviae (etymology: ‘Kernow’, the old name for Cornwall).  It causes stem lesions on members of Fagaceae, and leaf lesions and dieback on plants in several families.  Hosts include Rhododendron ponticum, an understory species on which it sporulates.  It is believed to be an introduced pathogen in the UK. In 2006, P. kernoviae was reported from an abandoned orchard in the Northland region of New Zealand on rotting fruit of custard apple Annona cherimola (Braithwaite et al, 2007).  It appears to match earlier soil isolates recovered in New Zealand from a radiata pine plantation and native kauri forest, but appears to be more pathogenic to exotic plants than on native New Zealand flora (Garner et al. 2015). P. kernoviae was recovered from necrotic leaf litter of Drimys winteri and streams in a native forest in Chile (Sanfuentes et al. 2016, Jung et al. 2018) leading to speculation that it could have Gondwanan origins. 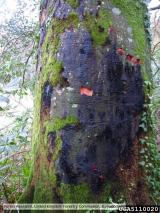 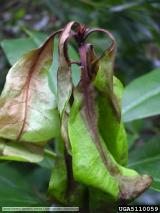 P. kernoviae has been found mainly on rhododendron in woodlands of southwest England with a few sites in northern England, Wales and Scotland, and Ireland. Between 2002 and 2008, 66 outbreaks occurred in managed and unmanaged land, and 5 outbreaks occurred in nurseries and garden centers in England and Wales (Walters et al. 2010). The pathogen produces abundant sporangia on leaves of Rhododendron ponticum that serve as primary inoculum for tree infections, so management efforts have focused on removal of this invasive species. Recent findings indicate that P. kernoviae can persist as oospores in rhododendron roots, complicating this management strategy (Fichtner et al. 2011).  In 2009, P. kernoviae was reported on Vaccinium myrtilllus in three heathland locations in Cornwall (Beales et al. 2009) and later on the Isle of Arran (Scotland).  The pathogen sporulates profusely on leaves.  It is postulated that long distance disease spread may occur when coastal winds carry infected, abscised leaves.   Local spread may occur via infected roots and rhizomes (Fichtner et al. 2010).  Other heathland species including Vaccinium vitis-idaea and Arctostaphylos uva-ursi appear to be highly susceptible in artificial inoculation tests, suggesting that this valuable botanical resource could be endangered (Beales et al. 2009).

P. kernoviae seems to have been first observed by Newhook in New Zealand in 1953 (Ramsfield et al. 2009). The pathogen was associated with diseased leaves, shoots, and fruits of cherimoya trees that were near native shrublands and forest in Northland (Braithwaite et al. 2007).  Previous isolates from soil in kauri forests 50 km away were not associated with disease, nor were isolates from Pinus radiata plantations near Tokoroa, 400 km to the south (Ramsfield et al. 2009). However, P. kernoviae was isolated infrequently from Pinus radiata with symptoms of red needle cast disease from several regions of New Zealand (Dick et al., 2014). The pathogen was recovered from symptomatic native vegetation only once, on Prumnopitys ferruginea (miro) (Gardner et al. 2015).

Table 1. Some of the most important hosts for Phytophthora kernoviae.

For more information about Phytophthora kernoviae, visit our Pathogen, Education and Management materials, and Reference sections.