Phytophthora arenaria has been isolated almost exclusively from Banksia-dominated heathlands in Western Australia. Most isolates were associated with dead or dying Banksia spp. (Proteaceae) scattered in the landscape Original isolations were initially misidentified as P. citricola based on morphology alone. However, during the re-evaluation of Phytophthora species isolated during 30 years of vegetation health surveys in Western Australia using molecular techniques, several new species were identified with these isolates initially being called P. sp. 1 (Burgess et al., 2009) which were later described as the new species P. arenaria (Rea et al. 2010). Since the original description many more isolates have had their identities verified and to date there are now 49 individual records of this species. Most interestingly, all new isolates are from the dry northern sand plains and while many other species (including new species) have been isolated during recent surveys in the urban landscape (Barber et al, 2013), P. arenaria has been exclusively isolated from natural vegetation. To date, P. arenaria has not been reported outside of Western Australia. 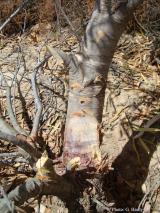 The impact of this species within the natural environment is low due to the low rainfall in the region and the sporadic nature of the disease.

Disease symptoms are limited to the sporadic sudden death of individual Banksia plants (a small to medium shrub which dominates the sand plains of Western Australia) often associated with a basal canker, collar rot, and dieback.

For more information about Phytophthora arenaria, visit our Pathogen, Education and Management materials, and Reference sections.