In 1993 an unusual Phytophthora was first isolated from bark lesions on the lower boles of dying alders along waterways in Britain. The Phytophthora resembled P. cambivora in both its gametangial and sporangial morphology. However, it was homothallic and many oogonia aborted.  An inoculation test confirmed its pathogenicity to Alnus. It has subsequently been reported in most European countries and a subspecies of the pathogen has recently been found in Alaska and Oregon. P. alni consists of three subspecies, the most commonly isolated and most virulent subspecies P. alni ssp. alni (also referred to as the 'standard form') and two less commonly isolated subspecies P. alni ssp. uniformis (also called the Swedish variant) and P. alni ssp. multiformis (which contains the Dutch, German and UK variants). 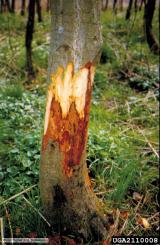 Phytophthora disease of alder is now widespread in Europe in the riparian ecosystems where alder commonly grows. It is also damaging alder in forest plantations, especially in Germany. In England, disease incidence is highest in the southeast, but heavy losses are also occurring in some of the large alder populations in western England and parts of Wales. The disease is also causing damage to alders on Scottish river systems, including the Rivers Avon, Dee, Deveron, Duirinish and Spey. Outside the UK, alder disease is now widespread in Europe with very high losses in northeastern France and Bavaria in Germany; in other areas disease impact is not yet so serious. Until 2006 the alder Phytophthora had not been found outside Europe, but recent reports suggest that a similar pathogen is present in a nursery in Minnesota, USA, infecting a woody ornamental species and in wildland streams in Alaska and Oregon. Interestingly, in Alaska and Oregon the pathogen was recovered from soil, not trees, and although isolates are pathogenic in artificial inoculation, P. alni ssp. uniformis is apparently not damaging alder trees in Alaska. In Oregon it does cause limited root lesions on red alder. In Europe, surveys and modeling show that risk for infection is higher in warmer, slow moving waters, and in fine textured soil, especially clay loams. Although the disease is usually seen along river systems it has been found in sites well away from riverbanks or other water courses, for example in orchard shelter belts and in new woodland plantings.  This suggests that the alder plants were already infected prior to planting. In Germany P. alni is disseminated on alder seedlings which became infected in the nursery.  The alder pathogen was found in rootstocks of alders from three out of four commercial forest nurseries that were tested.

In mid- to late summer diseased alders may exhibit leaves that are abnormally small, yellow and sparse, and which may fall prematurely, leaving the tree bare.  Trees that have suffered from infection over several years show dieback, with dead twigs and branches. There may also be heavy production of cones, usually a sign of stress in an alder.

Although many trees die rapidly once the crown symptoms appear, in others the disease may take a chronic form with the loss of foliage and branch dieback increasing over time. In a single alder clump with several stems, one or more stems may be affected and even die, while other stems in the same cluster may recover or remain healthy.

Examination of the base of a tree with severe crown symptoms often reveals a tarry or rusty spot, sometimes occurring up to 3 meters from the ground.  Beneath these bleeding spots the inner bark (phloem) is dead as a result of invasion by Phytophthora. When the inner bark is freshly exposed with a knife, the recently killed tissue is often mottled reddish to purple brown, and contrasts strongly with the creamy color of the adjacent healthy inner bark.

In Alaska, P. alni ssp. uniformis is occasionally isolated from riparian soil in alder thickets, but it has not been associated with  disease.. In Oregon, ssp. uniformis is one of several Phytophthora species causing limited necrotic lesions on alder roots.

The only trees described as affected in the wild are alder trees. P. alni is regarded as a serious threat to riparian woodland. Affected alder species include:

For more information about Phytophthora alni, visit our Pathogen, Education and Management materials, and Reference sections.