New Zealand kauri, Agathis australis, is an iconic, ancient southern conifer belonging to the family Araucariaceae. To Māori, the indigenous people of New Zealand, kauri holds a very significant place in their creation mythology, with iconic trees having their own names, for example Tāne-mahuta “the God of the Forest”. With approximately 1% left in old-growth, kauri has an International Union for Conservation of Nature listing as “Conservation Dependent”. Kauri is now threatened by the soilborne pathogen, Phytophthora agathidicida – a newly described pathogen in Clade 5. Other hosts are not known, and the origin of the pathogen has not been determined. Kauri dieback was first reported in 1972 on Aotea (Great Barrier Island), associated with regenerating “ricker” kauri. It was not recognized on the mainland until 2006. Since 2009, via delimitation surveys instigated by a multi-agency, government response (the Kauri Dieback Joint Agency Response Program), it has been identified that the pathogen is distributed throughout the natural range of kauri  (Northland, Auckland, and Coromandel) except Little Barrier Island, Waiheke Island and the Hunua Ranges in the Auckland Region (Waipara et al. 2013; Scott and Williams 2014). Kauri represents a climax, keystone taxon, and the premature loss of this species maycause a change in the composition of kauri-dominated forest to forests dominated by podocarps (Beever et al. 2009). 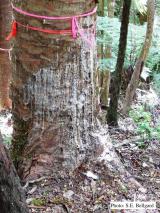 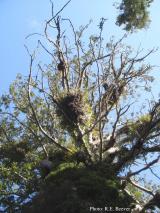 Top: Advancing triangular lesion on the trunk of an 80 cm DBH kauri tree. Bottom: Crown decline of mature kauri, branchlets with few or no leaves.

The symptoms of kauri dieback are recognized as crown decline, and resin production “gummosis” at the collar and lower and trunk region. However, this represents the chronic phase of the disease, with initial fine-root infections occurring many years before the onset of above-ground disease symptoms; the disease trajectory is purportedly dependent upon environmental factors, tree age, and inoculum density. Trees of all ages are killed in natural forest remnants, amenity stands and silvicultural plantations established in the 1950’s.

P. agathidicida parasitizes the secondary (cork) cambium, growing to the root crown and up the lower stem, forming lesions which are evident through the exudation of resin. A demarcation between necrotic brownish, infected phloem below and white healthy tissue above is visible when the outer bark is removed.

Field diagnosis in kauri is based on the crown decline symptoms, gummosis at the collar, presence of necrotic fine roots, and potentially, a strong demarcation between necrotic and healthy tissue, advancing from the large leader roots to the root crown in dying trees. The pathogen can be isolated from recently killed tissues by removing the outer bark, and plating the cork cambium to Phytophthora selective media. Commercial ELISA kits have not proven to be reliable, possibly due to the resin-laden plant material. Soil bioassays utilizing a drying and wetting phase, followed by baiting with cedar needles and germinated lupine radicles is routinely used. A real time PCR-based assay has been developed for soil and plant material (Than et al. 2013), as well as the development of a species-specific, fluorescent in-situ hybridization assay to assist with visualizing the infection process in planta.

The New Zealand government initiated and coordinates the Kauri Dieback Program (KDP), a joint agency response to manage kauri dieback. “Keep Kauri Standing” “Kia toi tu he Kauri” is the program to stop the further spread of the pathogen, contain the pathogen in infested areas, and if necessary, restrict access to certain diseased forest areas. All forest management and concessionaire activities in kauri forests are evaluated for their potential effects on the kauri resource, and activities are modified or appropriate mitigating measures are undertaken as necessary. Principal actions include trail use restrictions such as wet season or permanent closure, and/or renovation to elevated boardwalks, and sanitation through cleaning stations to assist washing of boots.

Phosphite trunk injections are being trialed as a remedial therapy, following successful applications in Australia for the management of Phytophthora cinnamomi (Horner et al. 2013). Resistance to P. agathidicida in the kauri population has not as yet been ascertained. The Healthy Trees Healthy Future program (led by Scion, New Zealand’s federal forest research institute and funded by the Ministry of Business, Innovation and Employment and KDP), is currently funding the testing of kauri for resistance to P. agathidicida. It is hoped that some differential host responses may provide the basis for the identification of trees with useful resistance, which will be used as part of a selected breeding program.

Phytophthora agathidicida can infect plants over a broad temperature range, with the pathogen recovered from soil (via soil bioassay) throughout the year. It is carried in mud, soil and infected root-debris, and potentially washes downslope in water. In recreational parks, transport has been primarily along trails, while downslope movement may occur in streams and potentially through overland flow during periods of heavy winter rains, although it has not been detected from stream water in infected kauri forest.

Oospores are formed after three months in deliberately inoculated seedlings of kauri, and P. agathidicida can be recovered after at least 9 years from soil stored at 10°C. It is hypothesized that resting spores, in root debris, are transported in mud on footwear during wet weather. This has spurred instigation of vertebrate culling programs (e.g. feral pig, Sus scrofa), because they are considered as a potential vector, as they are fond of foraging under kauri trees for giant kauri snails and earthworms (Krull et al. 2012).

The consequences of kauri dieback are visually dramatic, however, the ecological consequences are not well studied, with significant, plot-level studies only commencing in 2011. Standing dead trees are quickly attacked by pin-hole borers leaving a bleached “stag head”. Kauri is no longer logged and so trees have protected status. Distinctive plant associations with up to 36 species, including many rare endemic epiphytic species, reside in or on kauri. The pathogen removes one of the canopy dominants to be potentially replaced by other canopy members of the closely-related Podocarpaceae family, e.g. tānekaha (Phyllocladus trichomanoides) and rimu (Dacrydium cupressinum).

For more information about Phytophthora agathidicida, visit our Pathogen, Education and Management materials, and Reference sections.