Diseased larch felling to have 'huge impact' on Manx landscape

Aerial surveys by the Forestry Commission in 2011 showed the affected areas (photo). 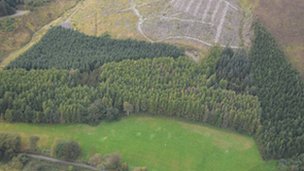 Work to fell hundreds of thousands of infected larch trees in the Isle of Man will begin this week after an "explosion" of a deadly tree disease.

According to the Manx government about 50% of the island's larch population is currently infected by Phytophthora ramorum.

Forester Jason Bolt said the essential work will have a "huge impact on the island's landscape".

Senior forester John Walmsley said the disease, first detected on the island in 2010, had "exploded" since March.

In July, a survey by the Manx Forestry Directorate showed a "considerable spread" of the disease in the north of the island.

Since then it has spread to the south, east and west.

Mr Bolt said: "Larch makes up around 20% of our forests and in the short term it will have a major impact."

Environment Minister Phil Gawne said it was a "vital step" for which "quick action was needed".

Coillte to fell 16,000 trees in major operation to control spread of the disease

Coillte has confirmed it is to close Gougane Barra Forest Park in Co Cork for six months to allow for a major tree-felling operation after the discovery of a tree fungus attack.

According to Coillte forestry productivity manager Padraig Ó Tuama, an outbreak of the fungus phytophthora ramorum has been discovered in the popular forest park near Ballingeary.

Mr Ó Tuama said Coillte had taken the decision to fell about 16,000 trees – primarily Japanese larch – in Gougane Barra to prevent the spread of the disease. “Phytophthora ramorum is a fungus-like disease that can affect a range of trees and other plant species, with Japanese larch particularly susceptible,” he said.

“Coillte have been working closely with the Department of Agriculture, Food and the Marine to detect and prevent the spread of this disease. Regrettably, Gougane Barra is one of 20 Coillte forests where the disease has been confirmed in Japanese larch since first detected on the species in 2010.”

A new evolutionary lineage of the destructive introduced tree pathogen Phytophthora ramorum, EU2 lineage, was recently discovered attacking larch and other hosts in Northern Ireland and south west Scotland, UK. Sixteen ‘medium × agar concentration × incubation temperature’ stress environments were tested to find a rapid and repeatable method to discriminate the known EU2 lineage from the EU1, NA1 and NA2 lineages in culture, in particular from the EU1 already prevalent across the UK; and to investigate whether EU2 might be adaptively different. At 28°C on both Carrot agar and V8 juice agar, the mean radial growth rates of all four lineages were significantly different, with NA2 > EU2 > EU1 > NA1. At this temperature, EU2 colonies were not only phenotypically distinct from EU1 and all other lineages but on average grew three times as fast as EU1. This indicates that EU2 is adaptively different from EU1. Twelve days growth in the environment ‘V8A/2% agar/28°C gave excellent discrimination of all four lineages in three repeat experiments, including clear discrimination of EU2 from EU1. Each lineage exhibited a distinctive colony pattern. The utility of this test environment was examined further by screening fresh UK isolates of unknown lineage from new larch outbreak sites alongside standard isolates. The lineage assignments predicted were corroborated by gene sequencing and RFLP profiling. These results also revealed that the EU2 lineage was present at several new larch sites in south west Scotland, whereas isolates from geographically adjacent areas such as the Isle of Mull, north west Scotland, the Isle of Man and north west England were all of EU1 lineage.

Pinus radiata D. Don is a forest tree species native to the Monterey Baja in California. Due to its rapid growth and desirable lumber and pulp qualities, between 1960 and 1980, about 12,000 ha of P. radiata were planted in Sardinia, Italy. The only disease reported on this conifer species has been Diplodia pinea, which causes tip and branch dieback (3). In January 2012, dieback and mortality of 25-year-old radiata pine trees were observed in a reforestation area of about 20 ha located in northern Sardinia (40°43′N, 9°22′E, 600 m a.s.l.). Symptoms included chlorosis, reddish-brown discoloration of the whole crown or dieback starting in the upper crown and progressing downward through the crown, and necrotic bark tissues at root collar. Approximately 25% of the trees were affected. In a first attempt, a Phytophthora species was consistently isolated from the rhizosphere of 23 symptomatic trees, which included necrotic fine roots using oak leaves as bait (4). Afterwards, it was also isolated from phloem samples taken from the margins of fresh lesions at the stem base and upper roots of affected trees using synthetic mucor agar medium (1). Isolation from soil samples of six healthy pine trees randomly selected in the site did not yield any Phytophthora isolate. On carrot agar (CA), Phytophthora colonies were stellate to slightly radiate with limited aerial mycelium.

Reports of Tane Mahuta's demise may be premature but death could be just a stray boot away. The dieback disease threatening the forest kings of northern New Zealand is as bad as it gets: once the algae-like microbes infiltrate the kauri's root system, there is no cure. By the time symptoms show - leaf yellowing, canopy loss, withered branches, bleeding lesions and collar rot - it is likely too late.

Talk to scientists and agencies beavering away on the response and the messages are at once frightening and encouraging. The disease is a new species of phytophthora, from the Greek for plant destroyer. Different strains have devastated everything from strawberries, tomatoes and potatoes to forest giants like jarrah in Australia, oak trees in Europe and North American chestnuts.

The soil-borne variety attacking our kauri, known for now as PTA, has spread to 11 per cent of kauri stands in the Waitakere Ranges. It has footholds in the Waipoua Forest, home of Tane Mahuta, on Great Barrier Island (where it was first observed in the 1970s but mis-identified), in the Russell Forest and on private bush lots in Auckland and Northland.

Phytophthora root rot is a stubborn enemy for some Christmas tree growers this year. With no fungicide yet proven effective to control Phytophthora, many growers are turning to species from Europe, Asia that are more resistant. Researchers at Washington State and other universities are hoping to unlock the secrets to some species' rot resistance.

Jeff Pollard trudged up the steep slope and stopped at a desiccated, rust-brown tree. Two months earlier, workers had tagged this Fraser fir as ready for market.

It was going to be someone's Christmas tree. And now it was dead.

"Never get paid back for this tree," he said with a shrug. "Eleven years of work -- gone."

The culprit: Phytophthora root rot, a water mold that, once in the soil, makes it unfit for production.

Pollard has been growing Fraser fir in these western North Carolina mountains for nearly 40 years. To him, it's "the ultimate tree."

But this persistent problem has him looking to a species from the birthplace of old Saint Nicholas himself for a possible alternative. And he's not alone.
More...

A disease that affects larch trees is continuing to ravage the island’s forestry, with about 50 hectares of trees felled and sweet chestnut, beech trees and garden shrubbery plants also affected.

The government has said that 50 per cent of the island’s larch population is now infected with the disease, phytophthora ramorum, also known as sudden oak death.

Area forester Jason Bolt said: ‘Sweet chestnut, beech and shrubbery plant species in gardens such as rhododendron have also been found to be infected in the island.’

Along with Dutch elm disease, phytophthora ramorum is one of two diseases affecting the island’s trees.

In addition, the Department of Environment, Food and Agriculture remains worried about the threat of a third, ash dieback.

Senior forester John Walmsley said: ‘To date we have felled thousands of trees clear felling an area of approximately 50 hectares throughout the forest estate due to phytophthora ramorum.

‘A further 20 to 30 hectares will be felled in the coming months and plans are being drawn up to deal with the most recent infected areas identified from our 2013 aerial surveys.

‘In an effort to contain the disease, the department has been and is continuing the clearfelling of infected areas as they are identified and as soon as is practical.

‘The public are requested to follow basic precautions during the problem, such as keeping to footpaths if requested to do so, keeping dogs on leads when walking in woodland areas and cleaning footwear and their animals before visiting other sites.’
More....