Phytophthora (pronounced Fy-TOFF-thor-uh) is a genus of microorganisms in the Stramenopile kingdom which includes water molds, diatoms and brown algae.  Phytophthora species resemble true fungi because they grow by means of fine filaments, called hyphae, and produce spores.  But unlike true fungi, their cell walls contain cellulose instead of chitin, their hyphae lack cross-walls, and the diploid phase, rather than the haploid phase, dominates their life cycle. Another striking feature of Phytophthora is that it produces swimming spores, called zoospores, during one phase of its life cycle, a vestige of its evolutionary origins in water.

There are currently more than 80 described species of Phytophthora worldwide, and the vast majority of them are plant pathogens.  The name Phytophthora is derived from Greek and literally means “plant destroyer.”  Noteworthy examples of Phytophthora include the infamous P. infestans that caused the Irish potato famine of the 1840s, P. cinnamomi which infects more than 1000 plant species, and the recently discovered P. ramorum which causes sudden oak death.  Phytophthora species are among the most destructive pathogens of agricultural crops and forests in the world.

Phytophthora species are well adapted to diverse plant hosts and environments, and they produce several types of structures that are specialized for survival, dispersal, or infection.

Oospores are sexual reproductive spores that result from fertilization of the oogonium (female organ) by an antheridium (male organ). Some Phytophthora species are self-fertile (homothallic), whereas others require cross fertilization (heterothallic).  Oospores are thick-walled, generally globose structures that enable long-term survival in plant tissue or soil. In heterothallic species, oospores are produced only after hyphae from two different mating types, designated A1 and A2, grow together.  In homothallic species, oospores form with a single mating type.

Chlamydospores are another type of thick-walled, long-term survival spore, but they are produced asexually.  In the presence of water, such as during wet weather, Phytophthora chlamydospores or oospores germinate to form sporangiophoresbearing sporangia (sporangium=singular).

In some Phytophthora species, sporangia can detach and be blown or splashed with water to nearby plants. Sporangia release short-lived, one-celled, flagellated zoospores that can swim through thin films of water on leaf surfaces or in water-filled soil pores, and can accumulate in puddles and ponds. Click here [Zoospore release.avi] to see a movie of zoospores being released from a sporangium. Sporangia can also germinate directly to form additional sporangiophores. When zoospores land on a suitable infection site, they stop swimming, drop their flagella, and develop a cell wall (they encyst). A cyst is a short-lived resting structure. Cysts germinate to form the microscopic, filamentous structures called hyphae. Hyphae allow the pathogen to infect and grow within plant cells to obtain food. Once Phytophthora infects the plant, it produces more chlamydospores, oospores, and/or sporangia, thus completing its life cycle. 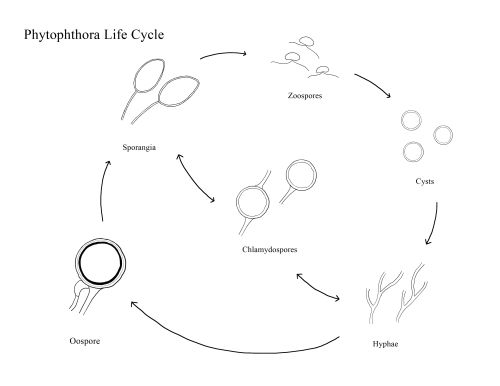 Phytophthora species damage plants by killing tissues. Infection and resulting necrosis may be in leaves, stems, or roots. The symptom of foliar infection is called “blight.” Infection on stems or twigs creates a “canker”, which may be localized or expand around the stem. If twigs or branches are girdled by expanding cankers,“dieback” results. Phytophthora may also invade the water conducting wood (xylem) beneath the inner bark, and cause symptoms in all or part of the canopy associated with water stress, such as “wilt.”

Many Phytophthoras infect the roots, causing “root rot”. Some kill fine roots only, and in others necrosis may progress up the root and into the root crown.  Fine root necrosis may lead to upper canopy “wilt” in times of water stress or “decline” over a longer time span. Root rot that progresses into major roots or the main stem may result in gradual “decline” or sudden “death” of the canopy. Infection that starts near the ground line or progresses to the main stem from the roots may be visible as a “canker”, or “collar rot.”

Some species can cause multiple symptoms on a single host, or cause different symptoms on different hosts. Many other pathogens, pests, injuries, and abiotic factors may cause similar symptoms, so expert help is generally required for making a definitive diagnosis.

Below are seven general types of symptoms caused by Phytophthora species:

Blight: (pictured below) Plant foliage develops a “water-soaked” appearance that progresses into brown or black irregularly shaped spots or wedge-shaped lesions that are usually not surrounded by a yellow halo.  The lesions may spread to or from the midrib, leaf petiole and stem. 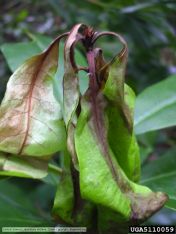 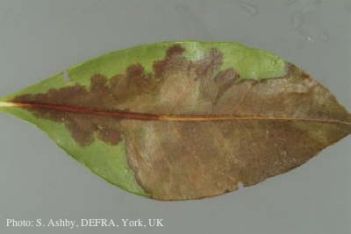 Dieback: (pictured below) The shoot tip, twig or branch tips die and the infection progresses towards the main stem. This is often accompanied by a loss of foliage. 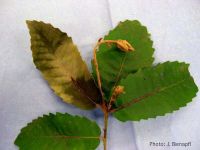 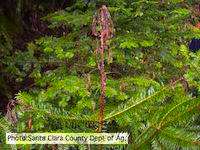 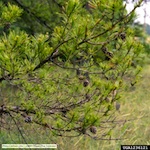 Decline: (pictured below left) Plants are unthrifty and fail to grow, or the canopy may become “thin” due to loss of foliage.  This is a gradual process that may take place over a period of several years. 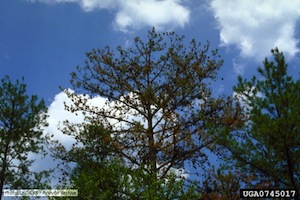 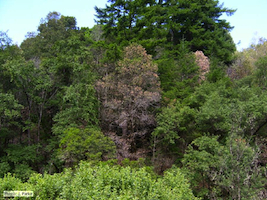 Death: (pictured above right) The whole canopy or sections of the canopy may die, with dead foliage remaining.

Canker: (pictured below) A darkly discolored necrotic lesion in the inner bark of a tree, generally only visible once the outer bark has been removed. These are most often on the stem (bole) or branches. Cankers are often accompanied by droplets of reddish-brown liquid that ooze through the bark, giving the appearance of “bleeding”.  Some Phytophthora species can also infect the underlying wood. 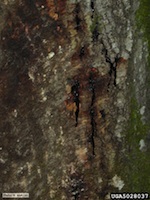 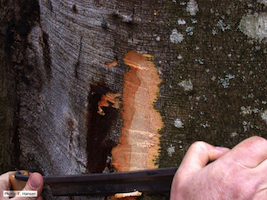 Rot:(pictured below) Darkly discolored rotten tissue, most often on the roots but sometimes extending above the soil surface (basal rot). Collar rot occurs at the base of the trunk and extends to just below the soil line. Bark must be removed to see collar rot. 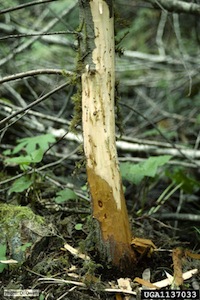 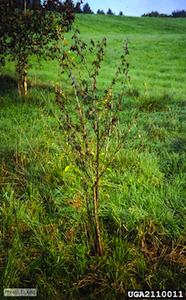 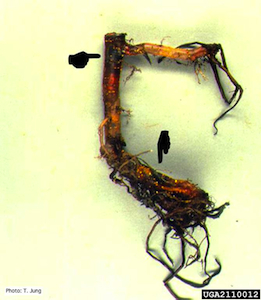 Wilting: (pictured above, middle) Foliage becomes flaccid due to lack of water uptake.  This is often the first aboveground symptom of root rot.